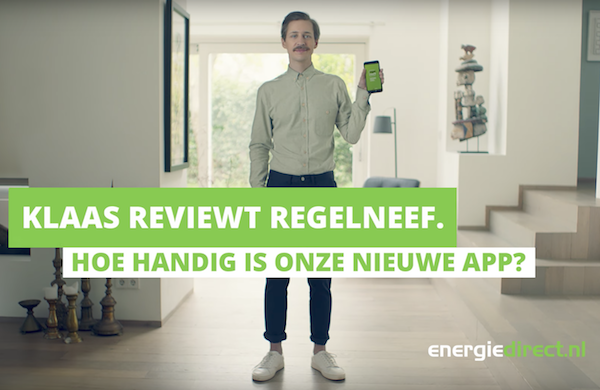 Recently the app Regelneef was launched for the customers of Energiedirect. It has been built with NativeScript and Angular and is a truly, awesome looking and performant native app.

Nativescript combined with Angular is a fine combination to build truly 100% native mobile apps. An Angular developer will immediately feel at home with this toolset and instead of using HTML to build your layouts, you start using different kind of tags like StackLayouts, Scrollingviews, ListViews, Buttons etc.

You can apply styling using SASS. In the end all of this translates at runtime to real 100% native controls with native speed. Your app will no longer use web views like we are used to with frameworks like Ionic when building Hybrid mobile apps. But still you can use your Web skillset like JavaScript, TypeScript and Angular.

Another advantage of NativeScript is that you always have access to all of the native APIs. So if you need something special on iOS for instance, look it up on the Apple SDK and start calling these methods from JavaScript / Typescript. Of the course, the same is true for Android.

You should use the NativeScript plugin template to kickstart your plugin development. Super useful!

If you have written exciting features for both iOS and Android you could wrap them in a NativeScript plugin and make it available at NPM so that all can benefit.

In fact, there are already many plugins available. And wouldn’t it be nice if there is a plugin marketplace for this as well? Well, it is there already! You can find it here: http://plugins.nativescript.org/

During development you are running the app in simulators (iOS or Android) and it would be best if you have a laptop with Mac OSx running. Then you are able to develop and build your app using XCode for iOS and for Android. The first one would not be possible on a Windows OS.

Personally, I am using Visual Studio Code with Typescript to develop the app. Using the terminal I am firing up the app to run in a simulator.

Like I said before, HTML is replaced by other layout tags which you should be able to learn quickly by looking at example projects provided by Telerik / Progress.

Debugging is a bit more difficult than when building hybrid mobile apps but Telerik is moving forward in this area so that you actually can run their debugger next to your simulator. If you don’t do that you are probably stuck to spitting out console log messages.

With NativeScript you can continue working the way you are used to when building apps, including Continuous delivery, unit testing, end to end testing and so on. In our setup we have been using Jira, BitBucket, NPM enterprise etc to achieve this goal. You probably need some additional tools and scripts for the building process like Fastlane for signing the app on iOS.

What is the Regelneef app about?

The Regelneef app is an app aimed at the consumer market which are basically the customers of Energiedirect. The app has went live recently and has received a lot of positive feedback and almost no issues after launch. Watch the movie if you like:

More information you can find here: